HISTORYISKCON belongs to the Gaudiya-Vaishnava sampradaya, or denomination, a monotheistic tradition within the broad Hindu culture. It is scripturally based on the 5,000-year-old Sanskrit text Bhagavad-gita, or “Song of God.” ISKCON traces its lineage directly to the speaker of that sacred book, Lord Krishna, who is revered as the Supreme Personality of Godhead. And to Lord Chaitanya Mahaprabhu, a 16th century incarnation of God who emphasized the chanting of Hare Krishna as the most effective means of achieving self-realization and love of God in this age. 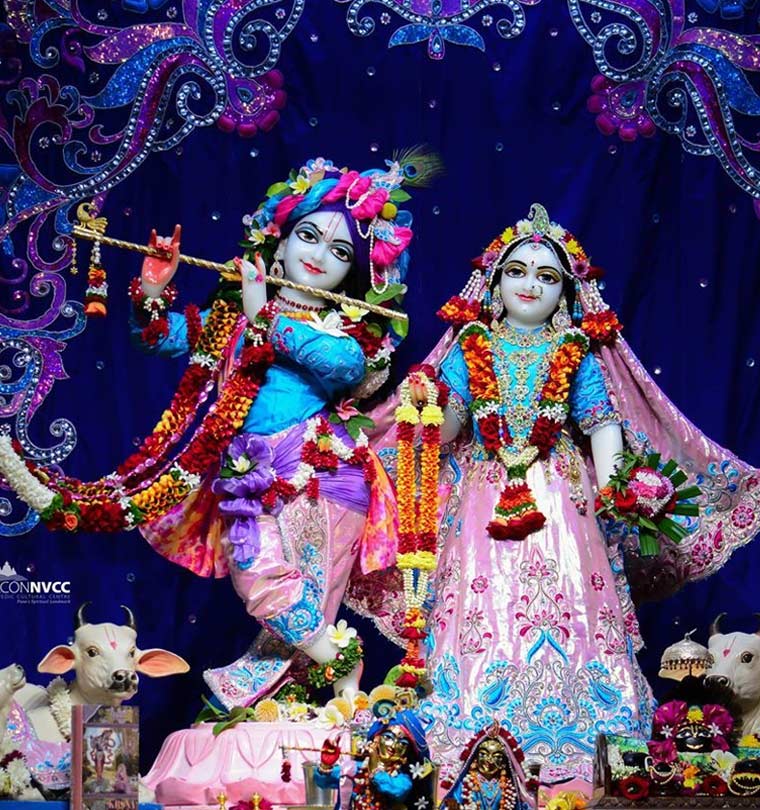 Krishna devotees teach that people are not their material bodies, but are eternal spirit souls, and that all beings are interrelated through God, the common father. In the Vaishnava tradition, God is known by many names, but primarily by the name “Krishna” which means “the All-Attractive Supreme Person.” ISKCON members believe that the same God is spoken of in all major scriptures of the world. ISKCON teaches that the goal of life is to develop love of God. Love of God is realized through the practice of bhakti-yoga, or devotional service. This ancient yoga system teaches the art of spiritualizing all human activities. To achieve Krishna consciousness effectively, members chant and meditate upon the holy names of Lord Krishna:

Bhagavad-gita (“The Song of God”), also known as Gitopanisad, is the essence of Vedic knowledge and one of the most important Upanishads in Vedic literature. It was spoken five thousand years ago by Lord Sri Krishna to the prince Arjuna on the Battlefield of Kurukshetra (located about 130 miles north of modern New Delhi). The sage Vyasadeva recorded the conversation, spoken in Sanskrit, and included it in his epic Mahabharata.

Are All Commentaries On Bhagavad-Gita Of Equal Value?

There are many English commentaries on the Bhagavad-gita, but none of them can be strictly said to be authoritative, because in almost every one of them the commentator has expressed his own opinions without touching the spirit of Bhagavad-gita. To be bona fide, the translator must be a recognized devotee of the Supreme Personality of Godhead, Lord Sri Krishna, and his views must be corroborated by evidence from other Vedic scriptures and spiritual masters in the line of disciplic succession

Why Are You Vegetarian?

The Vedic scriptures establish non-violence (ahimsa), as the ethical foundation of vegetarianism. According to the Vedas, God is the Supreme Father of all creatures, not just humans. Therefore, the slaughter of innocent animals is considered equivalent to killing one’s brother or sister. Hare Krishna devotees follow a wholesome diet, which excludes meat, Fish and eggs. Although it may be argued that vegetarians are guilty of killing vegetables, vegetarian foods such as fruits, nuts, milk, and grains do not require killing. But even when a plant’s life is taken, the pain it experiences is dramatically less than that of a highly sensitive animal such as a cow or lamb. According to the law of karma, nature’s law of action and reaction, human beings must suffer for any kind of killing that is against God’s laws. For this reason, as well as to show recognition and appreciation for the Supreme Proprietor and supplier of all foodstuffs, devotees prepare vegetarian meals as devotional offerings to Krishna. Such spiritualised food is then called prasadam (‘the mercy of Krishna’), which can be fully enjoyed.